The Fanconi anemia (FA) proteins participate in a coordinated set of events that lead to the repair of interstrand crosslinks (ICLs) when the FA DNA repair pathway is activated during DNA replication (Figure 1, reviewed in [34-36]). The key event in the FA DNA repair pathway is the monoubiquitination of the FANCI and FANCD2 proteins (commonly referred to as the I-D2 or D2-I complex) [5, 9-11, 37, 38]. Monoubiquitination of the I-D2 complex depends on FANCL, an E3 ubiquitin ligase which works together with FANCT/UBE2T, an E2 ubiquitin-conjugating enzyme [27-29, 39]. FANCL is a component of a multi-subunit complex called the FA core complex. The core complex contains FANCA, FANCB, FANCC, FANCE, FANCF, FANCG, FANCL, and the FA associated proteins (FAAP) FAAP20 and FAAP100 [40-42]. Deficiency of any of the core complex subunits leads to FA [1-3, 6-8, 13]. FANCM together with FAAP24 associates with the FA core complex, but its absence only partially reduces FANCI and FANCD2 ubiquitination [43, 44] and patients with biallelic mutations in FANCM have distinct presentation from the majority of FA patients (see Chapter 2) [16, 17, 45, 46]. FANCM is thought to participate in the activation of the FA pathway by localizing the core complex to chromatin and also through its role in activation of ataxia telangiectasia and Rad3-related (ATR), a DNA damage responsive kinase that phosphorylates multiple FA proteins [47]. FANCM also has been shown to be necessary for an early event during ICL repair, to promote skipping or “traverse” of the ICL lesion by the replication machinery [48, 49].

The FA core complex is necessary for the activation of its catalytic subunit, FANCL, and also for positioning its two substrates, FANCI and FANCD2, in proper orientation for monoubiquitination [50, 51]. The monoubiquitinated I-D2 complex stably localizes to lesions by encircling the DNA [52, 53]. Monoubiquitinated FANCI and FANCD2 are thought to facilitate the downstream repair events of DNA cutting and repair of the cut DNA [54, 55]. FANCQ/XPF is the essential nuclease that makes incisions around the lesion, a step called “unhooking” [23, 56]. XPF unhooking activity in this step is dependent on FANCP/SLX4, a protein scaffold for three nucleases [21, 22, 56-60]. Once the lesion is unhooked, a specialized translesion polymerase, Polζ, which includes FANCV/REV7 [31, 54], synthesizes DNA across the unhooked lesion creating a substrate for homologous recombination (HR) proteins. FANCD1/BRCA2, FANCJ/BRIP1, FANCN/PALB2, 11 FANCO/RAD51C, FANCR/RAD51, FANCS/BRCA1, FANCU/XRCC2 and FANCW/RFWD3 are proteins that participate in or regulate HR during ICL repair [4, 12, 18, 19, 24, 26, 30, 32, 61- 64]. Some of the HR proteins, FANCR/RAD51 and FANCD1/BRCA2, also work at earlier steps of repair to protect the DNA at the ICL from inappropriate degradation by the DNA2 nuclease-Werner syndrome ATP-dependent helicase (WRN) complex [24, 64]. It is also important to note that the homologous recombination proteins indicated above participate in repair of DNA double-stranded breaks during DNA replication and are major tumor suppressors in the cell (reviewed in [65]). Once the ICL repair is completed, the pathway is turned off by a deubiquitinating enzyme, ubiquitin specific peptidase 1 (USP1) [66].

In addition to participating in ICL repair, FA proteins are also active at other sites in the genome during DNA replication where they respond to replication stress, which is defined as any event that stalls the replication machinery. The FA proteins protect the newlyreplicated (nascent) DNA strands when replication is stalled [67, 68] (reviewed in [69]). They function at sites of under-replicated DNA, known as common fragile sites [70-72], and have been shown to play a role in the clearance of DNA:RNA hybrids, which form during transcription and are enhanced by replication and transcription machinery collisions [73, 74].

Figure 1. The role of Fanconi anemia proteins in the repair of DNA interstrand crosslinks (ICLs).
This simplified model highlights the activity of Fanconi anemia proteins. It is based on work from many laboratories as referenced in the text. For a more thorough review of the molecular pathway and additional proteins that participate in ICL repair, please see recent reviews [34-36]. For the latest study on the earliest steps of the pathway regulation during replication by the TRAIP protein, see reference [75] and for the studies on ICL traverse see references [48, 49, 76, 77]. See text for details.

The underlying pathophysiology of Fanconi anemia (FA) is best understood for the hematopoietic system, although more research in this area is needed. Hematopoietic stem cells (HSC) with a faulty FA pathway have increased levels of DNA damage and their attrition is an outcome of activation of the p53 pathway, which initiates apoptosis [78]. It also has been shown that driving quiescent/resting HSCs to enter the cell cycle by chronic bleeding or induction of type I interferon response can trigger bone marrow failure (BMF) in FA-deficient mice [79].These findings are consistent with the FA DNA repair pathway responding to problems encountered during DNA replication. These problems may occur at the sites of replication stress as defined above or may occur at the sites of DNA ICLs caused by metabolites that accumulate when stem cells divide or differentiate.

Endogenous metabolites, especially reactive aldehydes, including acetaldehyde and formaldehyde, have been strongly implicated in the pathogenesis of HSC failure and tumorigenesis in FA [80-83]. Mice deficient in ALDH2, the enzyme which detoxifies acetaldehyde, develop bone marrow failure and leukemia [80, 81], which are common outcomes observed in patients with FA (see Chapter 3). Lack of the ADH5 enzyme, which participates in formaldehyde detoxification, leads to the development of bone marrow failure even faster in a mouse model of FA deficiency [82]. The mouse studies identifying genetic interaction between acetaldehyde and the FA DNA repair pathway have been corroborated in patients with FA. A dominant negative variant in ALDH2 (ALDH2*2, rs671 G>A) is common in East Asian peoples, including Han Chinese, Japanese, and Koreans [84]. Carriers of this variant have greatly diminished enzymatic activity and biallelic variants result in almost absent activity [85, 86]. Hira et al. studied a cohort of Japanese FA patients and showed that the patients who carried the ALDH2*2 variant displayed an increased number of congenital abnormalities, earlier onset of bone marrow failure, myelodysplastic syndrome, and leukemia [83]. Presence of the biallelic ALDH2*2 variants exacerbated the FA-associated phenotypes even more dramatically, leading to a severe disease presentation.

In light of the above studies, it is useful to think of a two-tier system to illustrate how mammalian cells protect themselves from endogenous toxic metabolites (Figure 2, reviewed in [87]). As toxic metabolites are produced by normal cellular metabolism or as a result of ingestion (for example alcohol), enzymes including aldehyde and alcohol dehydrogenases, detoxify the toxic metabolites into non-toxic molecules. Even with a fully functioning first tier of protection, some toxic metabolites escape detoxification and cause DNA lesions. The FA DNA repair pathway, the second tier of protection, is then needed to remove the resulting DNA lesions to prevent cell death or mutagenesis. In the scenario where more lesions result due to the deficiency of the first tier of protection of enzymatic detoxification, cells are even more reliant on an efficient DNA repair pathway due to a greater burden of damaging DNA lesions. Thus, deficiency of both tiers of protection leads to severe disease. This paradigm may be used outside of hematopoietic stem cells and for epithelial cells from which squamous cell carcinomas (SCC) develop. This would be an important association considering patients with FA have an increased risk of developing SCC (see Chapters 4 through 7). However, the toxic metabolite implicated in generating DNA lesions likely will be dependent on tissue type. Understanding the sources of the endogenous DNA damage in FA cells will certainly contribute to understanding of the pathogenesis of the disease and may lead to development of new therapies. 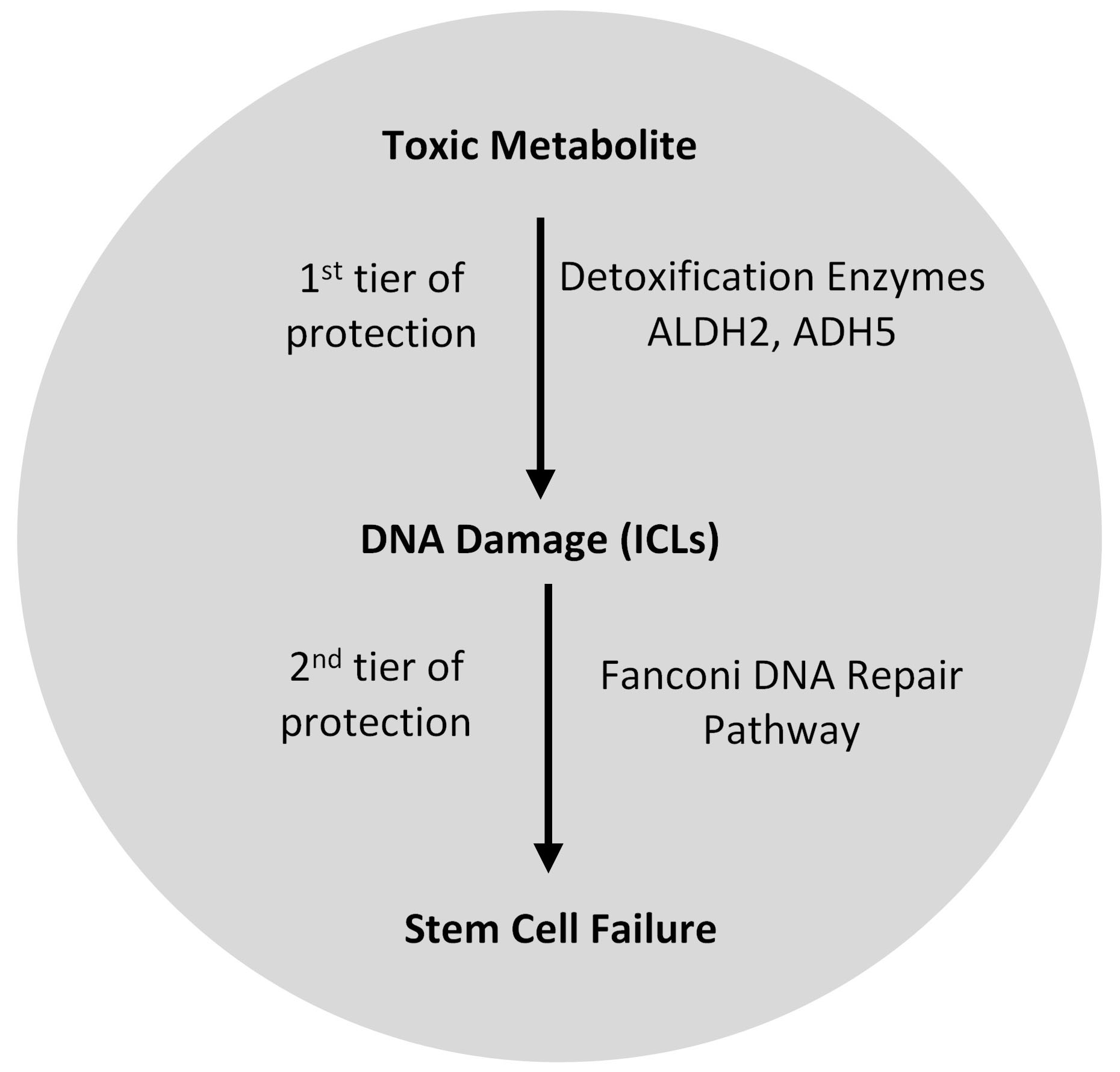 The first tier, which includes ALDH2 and ADH5, detoxifies metabolites (acetaldehyde and formaldehyde, respectively) that have potential to damage DNA. The Fanconi anemia DNA repair pathway repairs the lesions made by metabolites that escape detoxification.

Fanconi anemia (FA) is caused by faulty DNA repair of interstrand crosslinks (ICLs) in every cell in patients with the disease. Researchers have discovered 23 genes to date that cause FA and have established many key molecular mechanisms that regulate the FA DNA repair pathway. The absence of functional repair of ICLs can affect stem cells in particular, which results in many of the phenotypic manifestations associated with the disease. Bone marrow failure resulting from hematopoietic stem cells exposed to endogenous or exogenous toxic metabolites in the context of faulty FA DNA repair has been well characterized. However, more research is needed to develop a comprehensive understanding of how a faulty FA DNA repair pathway causes FA and squamous cell carcinoma and how mechanisms regulating the pathway can be exploited for novel treatments for patients with FA.