Cancer risk and management is a major concern for patients with Fanconi anemia (FA) due to the DNA repair defects associated with the disease. The most frequently diagnosed solid tumor cancers in FA patients include head and neck squamous cell carcinoma (HNSCC) and gynecologic squamous cell carcinoma (SCC). In addition to gynecologic SCC, patients with FA also develop other non-HNSCC solid tumors. This chapter describes the type and incidence of non-HNSCC solid tumors in 2,600 cases and case series of patients with FA reported in the medical literature from 1927 through 2018, as well as from other cohorts totaling more than 5,500 patients with FA. The numbers of FA patients with any type of cancer were more than 500 in the case reports and series, and more than 200 in the cohort reports. Cancer risks updated in an FA cohort within the National Cancer Institute’s (NCI) Inherited Bone Marrow Failure Syndromes Program also are discussed [1]. Comparison data include cancer cases published by the American Cancer Society (ACS) in 2019 and the Surveillance Epidemiology and End Results (SEER) U.S.-based cancer registry [2, 3]. Most of the data on non-HNSCC were from patients with FA who did not receive a hematopoietic cell transplant (HCT), although this status was not always clear from the reports, and thus some of the analyses include a combination of non-transplanted and transplanted patients.

The frequencies of rare cancers in patients with FA compared with the general population reported by the American Cancer Society (ACS) in 2019 are shown in Figure 1 [2]. These rare types of solid tumors in patients with FA do not follow the frequency pattern observed in the general population. For example, the five most frequent non-HNSCC cancers in the general population were breast, lung, prostate, colon, and melanoma (Table 1, Figure 1A), while the top five non-HNSCC in FA case reports and case series were brain, Wilms tumor, liver, esophageal, and vulvar cancers (Table 1, Figure 1B). The most frequently reported cancers in all cohorts of FA patients were similar: liver, vulvar, cervical, esophageal, and brain (Figure 1C). More than 500 of the 2,600 cases reported with FA had at least one cancer; more than 70 had HNSCC, and more than 200 had leukemia, with approximately 200 patients (roughly 1 in 13) with non-HNSCC tumors. More than 80 patients had at least two cancers, although some of those may not have been rare cancers.

Table 1. Non-HNSCC solid tumors in U.S. general population and in patients with FA.*

Combinations of one or two of acute myeloid leukemia (AML), brain, Wilms tumor, and neuroblastoma were observed in patients with biallelic mutations in FANCD1/BRCA2, as well as in a few patients with mutations in FANCN/PALB2, but not in other genotypes. The most frequent cancers that occurred as single cancers in other genotypes were AML, liver, esophageal, vulvar, and breast. A few types of cancer were reported in fewer than 10 patients each (i.e., lung, stomach, lymphoma, colon, and sarcomas (corneal carcinosarcoma post-HCT and rhabdomyosarcoma)), as well as single cases of osteosarcoma, retinoblastoma, hepatoblastoma, non-Hodgkin lymphoma (NHL), renal clear cell sarcoma, bladder, bronchial, prostate, cricoid, testis, and uterine cancers. 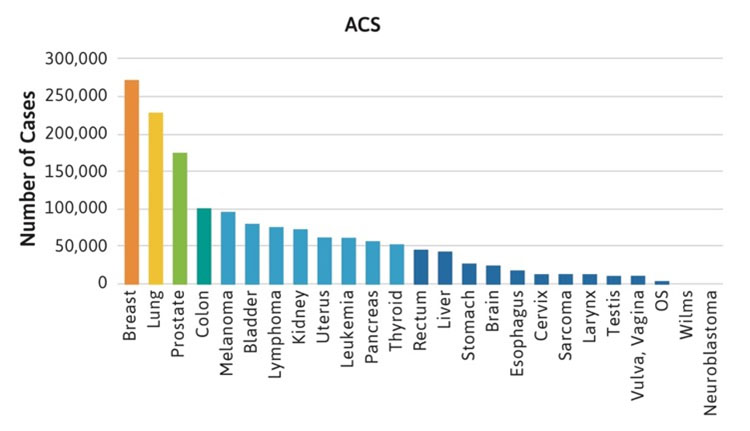 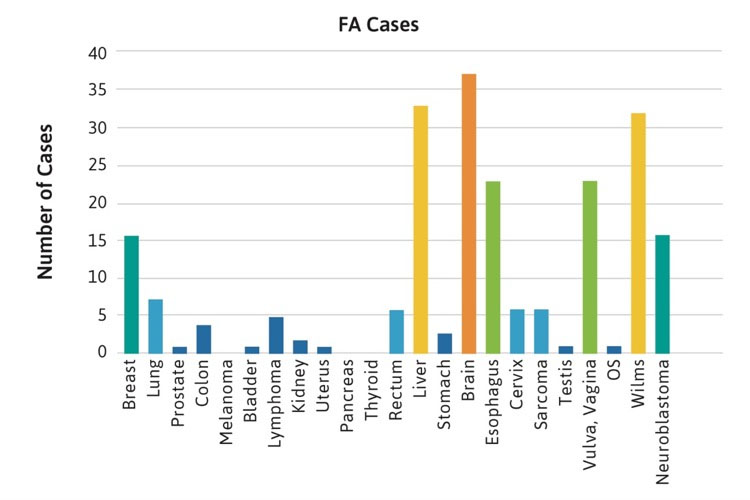 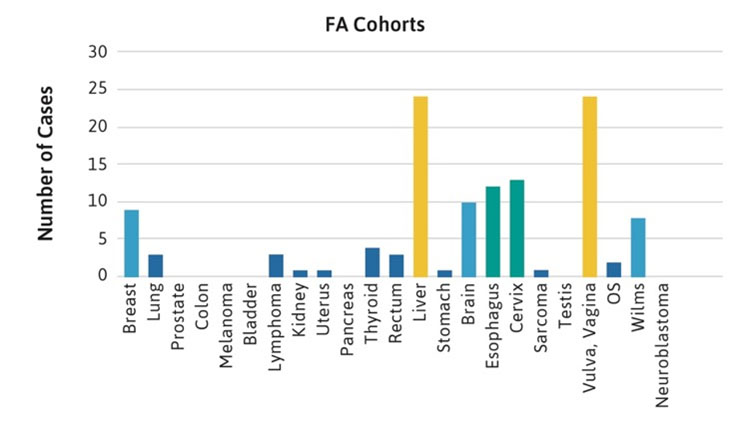 Figure 1. Number of cases of non-HNSCC tumors reported in the U.S. general population or the FA literature from 1927 to 2018. Cancers are listed on the horizontal axis in order of frequency as reported for the U.S. population. 1A. Data from the American Cancer Society (ACS) [2]. 1B. Data from 2,630 cases with FA reported in case reports or case series. Data on non-HNSCC are shown in the same sequence as in Figure 1A. 1C. Data from more than 5,000 cases with FA included in reports of cohorts, but not discussed individually.

Most of the rare cancers occurred in FA patients between the ages of 20-40 years, although liver tumors were reported during the teenage years, perhaps related to the use of androgens for bone marrow failure. Brain, Wilms, neuroblastoma and lymphoma cancers typically occurred before age 10 years, primarily in patients with mutations in FANCD1/BRCA2 and FANCN/PALB2. All of the non-HNSCC solid tumors occurred at substantially younger ages than in the general population, where the median age for any type of solid tumors is between 60-70 years (Figure 2). For example, esophageal, breast, lung, and stomach cancers were reported in FA patients at ages between 20-30 years. It is important to note that the diagnosis of a malignancy (solid tumors or AML) preceded the diagnosis of FA in approximately 35% of cases [4] 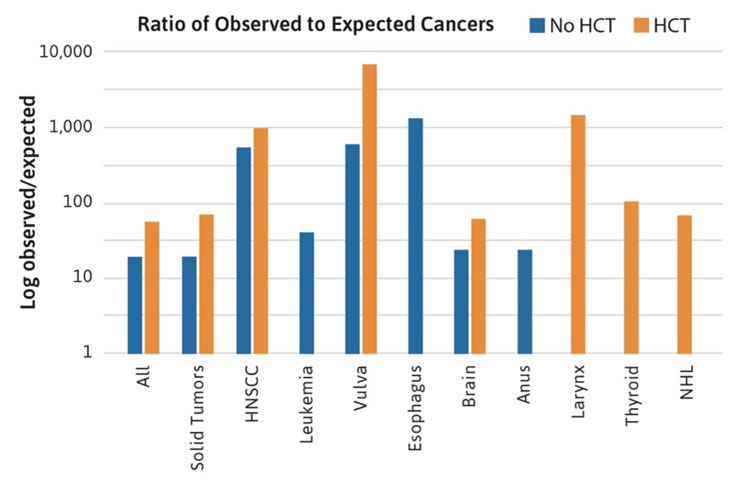 Figure 2. Age at cancer diagnosis in FA cases. The blue bars denote data from the general population, with a median age between 60-70 years in most cancers. The orange bars denote cases with FA reported at the individual level, with median ages below 40 years (most between 20-30 years).

The nature of the descriptive data from case reports and case series does not lend itself to more sophisticated quantitative analyses, such as cumulative incidence or observed to expected ratios. These types of analyses have been published in separate cohorts [5-7] and recently have been updated for the NCI FA cohort [1]. The NCI cohort data were used to reexamine the role of HCT [8] and it was determined that all solid tumors, especially HNSCC, occurred at a higher rate in transplanted patients compared with patients who were not transplanted (Figure 3). The cancer sites following HCT included HNSCC (particularly oral cavity), as well as vulvar, larynx, and brain. In addition, cancers unique to transplanted patients were thyroid cancer and Non-Hodgkin’s lymphoma (NHL) [1]. 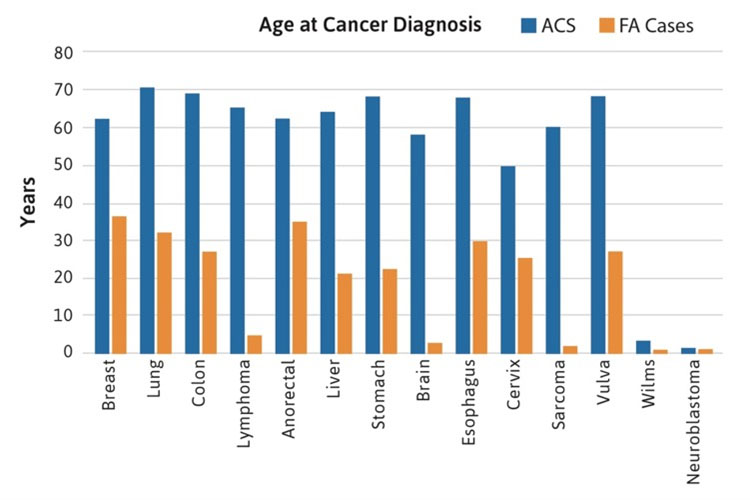 Figure 3. Ratio of observed to expected cancers in the NCI Fanconi Anemia cohort. The bars compare the observed numbers of cases to those expected from the Surveillance Epidemiology and End Results registry, after adjustment for age, sex, and birth cohort. Standard incidence ratio data are log transformed, since the values range from 10 to more than 1000. The blue bars denote patients with FA who did not have a hematopoietic cell transplant (HCT). The orange bars denote patients with FA who had an HCT. The data suggest that the relative risk of most FA-type cancers (particularly HNSCC and vulvar SCC) is higher in the transplanted group. In addition, cases of cancer of the larynx, thyroid, and Non-Hodgkin’s lymphoma appeared only in the transplanted group [1].

The NCI cohort data also allowed determination of the ratio of observed (O) to expected (E) cancer cases, adjusted for age, sex, and birth cohort, based on data from the SEER Program. The quantity O/E is often called the standardized incidence ratio (SIR). Accurate SIR calculations are not possible using literature case reports because of the potential for biased reporting of cases (numerators) and the lack of information about how many persons would be reported in the literature were they to develop a cancer (denominators). The NCI cohort enrolled all available patients and followed them consistently and, thus, both numerators and denominators were well defined. Some of the rare cancers occurring in FA patients are extremely rare in individuals of the same ages without FA. It is essential to take age into account when assessing risk. The O/E ratios for rare cancers do not take age into account and were similar to the high ratios observed for HNSCC and gynecologic cancers (e.g., >1000-fold for esophageal cancer). The limited data from the NCI FA cohort suggest that cancers that developed following HCT were higher risk cancers than those that developed in non-transplanted patients; additionally, the types of cancers that developed in transplanted patients were not typically seen in the non-transplanted patients (Figure 3) [1, 8].

The crude rate of solid tumors in FA patients is approximately 5-20%, based on the numbers of solid tumors reported divided by the total number of patients reported in the literature cases since 1927. The NCI cohort data were used in competing risk analyses to determine that the cumulative incidence or probability of solid tumors as the first adverse event was about 25% by age 50 years. In a hypothetical scenario in which severe bone marrow failure could be excluded, the cumulative incidence of solid tumors was 75% [8]. The most frequent solid tumors appear to be HNSCC and gynecologic SCC. While the absolute numbers of the rare solid tumors are small by contrast, the relative risks for some of them are as high as for HNSCC and gynecologic SCC, and the absolute risk is high enough that patients should be monitored for them closely.

Table 2: Surveillance for non-HNSCC and non-gynecologic SCC cancers in patients with FA.

Treatments for solid tumors, including the rare tumors discussed in this chapter, in patients who do not have FA include surgery, radiation, and chemotherapy. Options for treating solid tumors in patients with FA are limited. The best modality is surgery when possible. Radiation may be effective, although it may lead to complications such as skin reactions, mucositis, ulceration, etc.

The data reviewed in this chapter have several limitations. Some patients may have been reported more than once. Patients reported in the older literature may have been misclassified and may not have had FA. There may have been biased reporting, overreporting of case reports with cancer, and underreporting of those without cancer. Since cancer is age-dependent, and many of the cases were reported as young children and may have developed tumors after they were reported, the cumulative incidence of cancer may be greater than indicated from the published data. This literature review was based primarily on cases reported in English and, thus, cases in other languages may have been overlooked. Cases reported in series for which the focus was the gene and mutation may have had insufficiently detailed description of their clinical problems, including cancer.

Patients with FA are at high risk for developing head and neck squamous cell carcinoma (HNSCC) (see Chapter 5) and other non-HNSCC cancers, such as gynecologic squamous cell carcinoma (see Chapter 7). This chapter summarizes the type and incidence of all rare non-HNSCC solid tumors in cohorts as well as case reports and series of patients with FA reported in the medical literature from 1927 through 2018. The data show that rare solid tumors in FA patients do not follow frequency patterns observed in the general population. The top five non-HNSCC cancers diagnosed in case reports and case series of FA patients are brain, Wilms, liver, esophageal and vulvar cancer. Importantly, most non-HNSCC tumors that develop in patients with FA occurred at substantially younger ages (20-50 years) compared to the general population (60-70 years). The data also show that patients treated with hematopoietic cell transplant develop higher risk tumors than non-transplanted patients. Therapeutic management of non-HNSCC tumors using modalities currently used in the general population, such as radiation and/or chemotherapy, are generally contraindicated in patients with FA due to issues related to high toxicity. Surgical removal is currently the best approach for treating solid tumors in patients with FA; however, improved screening techniques are needed to identify early neoplastic lesions. Research that focuses on identifying optimal ways to diagnose, prevent, and treat rare solid tumors in patients with FA is desperately needed.