This chapter describes the most common skin problems that affect patients with Fanconi anemia (FA) that result directly from the disease or treatments associated with the disease. Skin abnormalities, such as altered skin pigmentation, can be the presenting symptoms of Fanconi anemia (FA). Patients with FA who undergo hematopoietic cell transplants (HCT) also can develop skin abnormalities that result from graft-versus-host disease (GvHD) that occurs in the skin. The risk of developing skin cancer may be increased for adult FA patients due to the DNA repair defects associated with the disease, making early education on sun protection and skin cancer prevention essential. Guidelines for screening and treating warts, actinic keratosis, and cutaneous cancers including basal and squamous cell carcinoma and melanoma are also discussed.

Appearance of Skin in Patients with Fanconi Anemia

Pigmentation Changes
Changes to pigment are the skin abnormalities most commonly associated with a diagnosis of Fanconi anemia (FA) (see Chapter 2). A patient with FA can develop either hyperpigmentation or hypopigmentation, typically in sun-exposed areas [1, 2]. Hyper- and hypo-pigmented patches of skin can appear on the neck, trunk, and tops of hands and feet; they also can appear on under arms, genitals, hand palms, or foot soles (Figure 1). Differently colored areas of skin often overlap and can create a freckled appearance: raindrop-like, light-colored patches of skin scattered over darker areas. Some patients also appear to have a dusky or shadow-like skin tone, most notably in joint areas, lower extremities, and on the neck. Smooth-bordered, tan patches of skin (café au lait macules) also are common. Patients with FA also may be prone to easy bruising due to low blood cell counts, which can present in the skin as small (petechiae) or large (purpura) areas of bruising and may cause locally increased pigmentation as these areas heal [3].

Testing for FA should be considered in young children with distinct hyper- and/or hypo-pigmented discoloration, or café au lait macules and accompanying disorders suggestive of FA (see Chapter 2). While some FA patients develop skin abnormalities, others do not; and such abnormalities are not unique to individuals with FA. The hypopigmented patches in patients with FA are found also in syndromes such as neurofibromatosis and tuberous sclerosis. Café au lait macules are a relatively common birthmark on patients with neurofibromatosis. For cosmetic appearances, some hyperpigmented lesions such as café au lait macules may be removed by laser treatments. 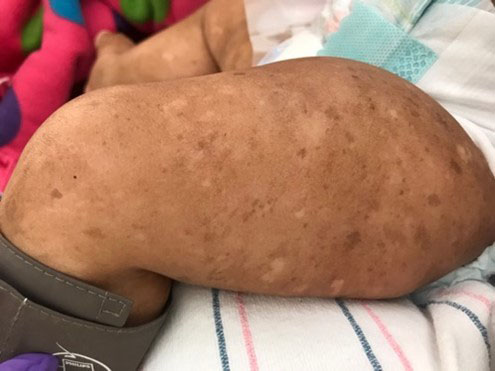 Figure 1. A patient with Fanconi anemia and pigmentary changes in skin.

Patients with FA may develop Sweet’s syndrome (SS), also called acute neutrophilic dermatosis, which presents as red plaques or nodules on the skin (Figure 2), which may be painful. As many as 12% of all FA patients develop SS, according to one report [4]. The syndrome frequently develops many years after a patient has been diagnosed with FA. Fever typically accompanies the red skin plaques or nodules, and similar lesions may be present in a patient’s bones, lungs, or gastrointestinal tract.

Sweet’s syndrome lesions are mistaken often for sites of active infection and treated as such; however, when these plaques are biopsied they show no sign of infection and heal very poorly. Providers should consider the possibility of SS in patients with FA who have red skin lesions that do not respond to antibiotics. Because FA patients can develop SS lesions below the skin, radiographic imaging may be necessary to diagnose the condition. Of note, patients with FA who develop SS also tend to have a high incidence of myelodysplastic syndrome (MDS) and acute myelogenous leukemia (AML), which either precedes or follows shortly after the diagnosis of SS. When SS is diagnosed along with characteristic hematologic or skeletal abnormalities, providers should consider a diagnosis of FA. Patients with FA who develop SS should undergo a bone marrow aspiration and biopsy to evaluate the possibility of evolution to MDS or AML.

Patients with FA often have unusually high levels of warts, which may signal a decrease or abnormality in cell-mediated immunity as warts can be initiated by human papillomavirus (HPV) infection [1]. Warts can be treated using cryotherapy or various other topical agents. Actinic keratosis, a non-cancerous growth, presents as flat pink or red scaly patches and may progress to SCC.

Ultraviolet (UV) rays emitted by the sun can have multiple damaging effects on the skin, some of which may be heightened in FA patients. Ultraviolet rays induce DNA damage, which increases the potential for skin cancers such as basal cell carcinoma (BCC), squamous cell carcinoma (SCC), and melanoma over time [5]. This risk is underscored by the fact that UV rays can be immunosuppressive in the skin, and immune surveillance is critical for the prevention of skin cancer. Ultraviolet radiation from the sun has different subtypes: Ultraviolet A (UVA) causes premature aging and wrinkling of the skin; Ultraviolet B (UVB) induces DNA damage, such as double-strand breaks, and is the major cause of skin cancer. Individuals with FA have a decreased ability to repair the types of DNA damage induced by UVB (Chapter 1) and therefore have increased potential vulnerability to the damaging effects of UVB and potential to develop BCC and SCC [6].

Basal cell carcinoma manifests typically as shiny, waxy, pearly red or pink bumps that grow slowly with low metastatic potential. Cutaneous SCC appears as red, thick, scaly, tender patches of skin that are highly metastatic, especially when localized on the head or neck. Individuals who are immunocompromised have an increased risk of developing SCC. In a young FA patient, multiple scaly lesions are likely to be warts. In an older adolescent or adult, providers should perform a biopsy to determine whether the lesion is AK, BCC, or SCC.

Dermatologists commonly use surgery to remove skin cancers, although photodynamic therapy (PDT) can be used to treat BCC, SCC, and AK. Other skin cancer therapies used in the general population include topical chemotherapy agents such as 5-Fluorouracil and/or drugs that stimulate the immune system to target precancerous lesions or cancer. The tolerability and efficacy of these treatments in patients with FA has not been well-studied.

Melanoma is highly metastatic and must be removed immediately. The majority of melanoma are black or brown, or multicolored with asymmetrical and irregular edges. Patients who have received HCT may have an increased number of melanocytic nevi (moles) on limbs, fingers, ears, or other locations [7] and these patients must be followed carefully. It is currently unclear whether FA patients have increased risk for melanoma. However, UV induced immune compromise and DNA damage are both risk factors for melanoma and have relevance in FA; therefore, it is recommended that clinical care providers conduct annual full body skin examinations for melanoma (and non-melanoma cancers) starting at age 18. Similar to BCC and SCC, surgical removal of melanoma is the best curative option for patients with FA.

It is critical that FA patients practice vigilant skin protection or sun avoidance from an early age [8]. Skin protection should include protective hats and clothing in addition to sunscreen. Sunscreens that contain physical blockers, such as zinc oxide and titanium oxide, are effective and tend to be the gentlest on sensitive skin. Chemical absorbers, such as benzophenones and salicylates, also provide broad-spectrum coverage though rates of skin allergies and irritation are higher. Sunscreens of at least 30 SPF should be reapplied every 1-2 hours. UV interaction with the skin is integral to vitamin D synthesis; therefore, sunscreen use can decrease vitamin D levels. Diet and vitamin D supplements can provide adequate amounts of vitamin D (see Chapter 9).

Androgen Therapy and Laser Hair Removal
Androgen therapy (see Chapter 3) can increase hair growth in both men and women. Laser treatment may remove unwanted hair, but it is unlikely to have a lasting effect if androgen therapy continues. The risks of laser hair removal are discomfort, temporary pigment changes, and scarring. Laser hair removal has not been associated with an increase in the risk of skin malignancy. Laser treatment should be performed by a licensed physician with experience in laser therapy.

Hematopoietic Cell Transplant
Cutaneous graft-versus-host disease (GvHD) in patients with FA results primarily from the reaction of donor T-cells to the patient’s skin after hematopoietic cell transplant (HCT). The clinical manifestations and histological features of GvHD closely resemble other conditions seen post-transplant in patients with FA. In addition, chronic GvHD can present as pigmentary alteration in the skin, which also is a feature of FA. Therefore, clinical care providers must prioritize the recognition and management of cutaneous GvHD [9, 10]. The prevention and treatment of GvHD is discussed in detail in Chapter 3.

While all stem cell transplant recipients are generally at risk for nonmelanoma and melanoma skin cancer, patients with FA may be at heightened risk due to their decreased ability to repair damaged DNA [6]. Skin cancer also may behave more aggressively in this population [11]. Risk factors in the general population for nonmelanoma skin cancer include a history of chronic GvHD and/or exposure to prolonged immunosuppression, the anti-fungal medication voriconazole (see below), and radiation therapy. Risk factors for melanoma include previous treatment with certain alkylating and antimitotic chemotherapies and radiation.

Stem cell transplant recipients may develop localized or generalized loss of skin or hair color, termed vitiligo [12]. The cause of this condition is unclear, though it may be more common in patients with a history of acute or chronic GvHD. These patients should be particularly careful to protect their skin from the sun or to avoid sun exposure altogether.

Voriconazole is an anti-fungal agent that increases skin sensitivity to sunlight. Voriconazole use has been implicated in SCC development in non-FA patients when used for 12 months [13]; therefore, the use of voriconazole, and other anti-fungal medications, should be discussed with the FA patient’s hematologist and transplant team.

Patients with FA experience high rates of abnormal skin changes, including hyper- or hypo-pigmentation, café au lait spots, the growth of warts, actinic keratosis, and melanoma and non-melanoma skin cancers. Patients with FA may be at increased risk for melanoma and basal and squamous cell carcinomas due to faulty DNA repair associated with the disease; therefore, it is recommended that they undergo annual whole body skin examinations from an early age and no later than 18 years. Patients with FA in all age groups (including infants and those undergoing HCT) also should follow strict guidelines to minimize exposure to UV rays by avoiding direct sunlight through UV blocking clothing or regular application of chemical sunscreens with UV blocking formulations, such as zinc oxide. Hematopoietic cell transplant increases the risk for skin-associated complications such as graft-versus-host disease, which can affect the skin. The patient’s clinical care team should continuously monitor the patient for potential cutaneous effects caused by treatments commonly used for patients with FA.