*The following is a press release about the recent publication on FA gene therapy in the journal Nature Medicine. This press release was provided by the Center for Energy, Environment and Technology (CIEMAT), the Center for Biomedical Network Research on Rare Diseases (CIBERER), the Institute of Health Research of the Jiménez Díaz Foundation (IIS-FJD), and Hospital del Niño Jesús in Madrid. Links to the Spanish version, the English version in PDF-form, and a link to the journal are provided at the bottom of this page.

Madrid, 9th September 2019 - The prestigious journal Nature Medicine publishes the first results of a gene therapy based clinical trial in patients with Fanconi anemia. In this study the authors demonstrate for the first time the production of blood cells derived from the patients’ genetically corrected stem cells.

This clinical trial has been carried out by members of a novel research program, EUROFANCOLEN, coordinated by Dr Juan Bueren, from the Center for Energy, Environment and Technology (CIEMAT), the Center for Biomedical Network Research on Rare Diseases (CIBERER) and the Institute of Health Research of the Jiménez Díaz Foundation (IIS-FJD), under the clinical direction of Dr Julián Sevilla, from the Foundation of the Hospital del Niño Jesús, in Madrid, the clinical sponsor of the trial. The first authors of the study are Dr. Paula Río and Dr. Susana Navarro, affiliated to the CIEMAT / CIBERER / IIS-FJD Consortium.

Fanconi anemia is a rare genetic disease characterized by bone marrow failure and cancer predisposition that appears in most patients with poor blood cell production at very young ages. Aside from other palliative treatments, the transplantation of hematopoietic stem cells from a healthy donor nowadays constitutes the treatment of choice in these patients. Although this type of transplant has experimented substantial improvements in recent years, not all patients have an adequate donor. Additionally, this treatment requires pre-transplant chemotherapy and is not free of rejection problems and other long-term side effects.

The work published in Nature Medicine is focused on Fanconi anemia patients without a family donor and with mutations in the FANCAgene, which is the gene affected in the majority of Spanish patients with the disease.

This work demonstrates, for the first time, the possibility of performing a new gene therapy based procedure that starts with the mobilization of stem cells from the bone marrow to the blood stream. These cells are subsequently collected from the patients’ blood through a procedure called apheresis, that takes place at the Pediatric Hematolgy Units of the Niño Jesús and Vall d’Hebron Hospitals, in Madrid and Barcelona, respectively. This process is followed by a second stage in which the genetic defect of the stem cells is corrected throught the insertion of the corrected gene by the use of a modified virus. This stage is carried out through a one day manipulation of the cells in a dedicated laboratory at CIEMAT, the CliniStemfacility. Finally, the genetically corrected cells are sent to Hospital del Niño Jesús for reinfusion into the patient without the need of any chemotherapy-based treatment like those used in current transplants with healthy donor’s cells.

The authors of this work have shown that genetically corrected stem cells engraft and progressively expand in the bone marrow of the four treated patients thanks to a preferential growth of the corrected stem cells, as opposed to the uncorrected ones. Likewise, the authors have proven that the proportion of “healthy” cells (corrected for the genetic defect) increase in peripheral blood over time. After a three-year treatment, more than half of the blood cells from one of the treated patients turned out to be “healthy” cells; that is, corrected for the genetic defect. As a consequence of this treatment, the progressive drop of blood cells was stabilized in patients with a higher proportion of “healthy” cells. The treatment is currently restricted to clinical validation in patients in a phase I/II clinical trial.

The results obtained in this study open new expectations for the treatment of Fanconi anemia patients, since gene therapy has never been proven effective in this disease. The fact that it is not necessary to administer chemotherapy as a previous step to cells infusion, allows patients to be discharged from the hospital much earlier, only two or three days following infusion of their own corrected cells.

“There is an urgent need for new therapies for patients affected by Fanconi anemia, since the current long-term effective treatment is bone marrow transplantation, which is not free of toxicity and risks” stated Dr. Río and Dr. Navarro. “We are very pleased with the long term data obtained so far, which supports our gene therapy approach as an innovative and low toxicity treatment for the hematological component of this devastating disease” affirms Dr. Juan Bueren. “In addition” adds Dr. Julian Sevilla, “we have not observed serious adverse effects associated with the treatment in patients infused with genetically corrected stem cells.”

This work has been possible thanks to grants from the Ministry of Health and Social Affairs of the Government of Spain, the 7th Framework Program of the European Commission (EUROFANCOLEN) and the Community of Madrid.

The lentiviral vector developed by the CIEMAT / CIBERER / IIS-FJD Consortium has obtained the orphan drug designation from the European Medicines Agency and the US Food and Drug Administration, and has been licensed to Rocket Pharmaceuticals in cooperation with the technology transfer program of the Botín Foundation. The upcoming clinical studies in Fanconi anemia patients will be sponsored by Rocket Pharmaceuticals, both in Spain, and in other European countries and the US. The new clinical trials will be aimed at obtaining a Marketing authorization (MA) to use this new therapy for the treatment of Fanconi anemia to patients worldwide. 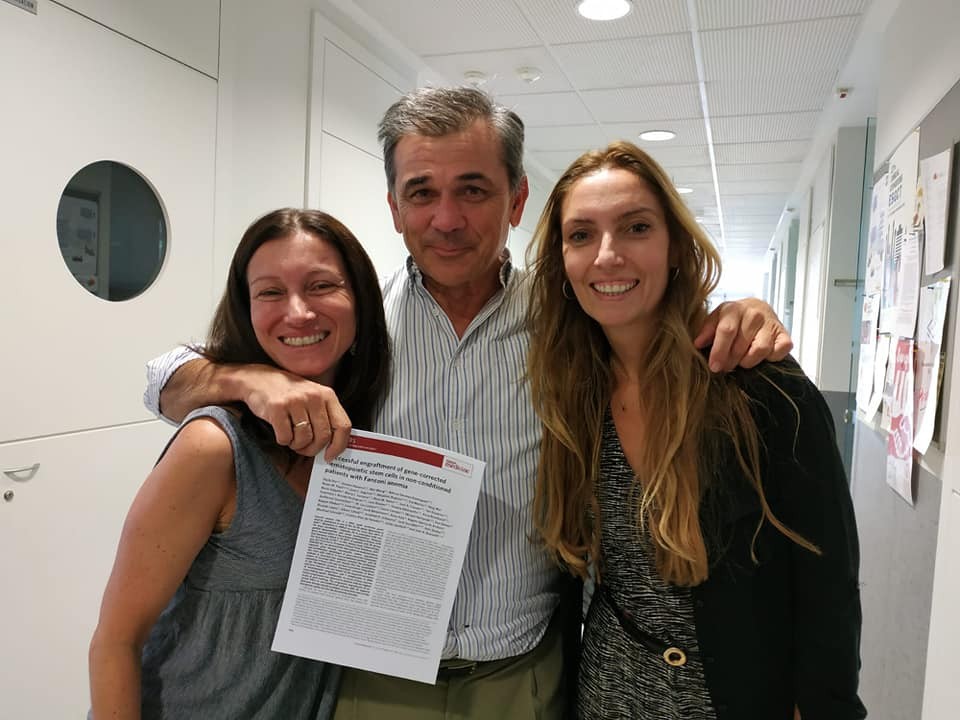 The Center for Biomedical Network Research (CIBER) is a consortium dependent on the Carlos III Health Institute (Ministry of Science, Innovation and Universities) and is co-financed by the European Regional Development Fund (ERDF). CIBER, in its Thematic Area of Rare Diseases (CIBERER), is the reference center in Spain on rare diseases research. Its main objective is to coordinate and favor basic, clinical and epidemiological research, fostering the translation of laboratory research results to the patient, and providing scientific answers to questions born from the interaction between doctors and patients. CIBERER is integrated by a team of more than 700 professionals and 57 research groups. In addition, it has collaborations with 20 clinical groups.www.ciberer.es

The aim of the Fundación de Investigación del Hospital Infantil Universitario Niño Jesús is to manage clinical research programs and projects, as well as other activities in the field of biomedicine, in order to contribute to the health promotion and protection of the pediatric population and to the progress and improvement of the Health System of the Community of Madrid.

The final objective of the Fundación de Investigación del Hospital Infantil Universitario Niño Jesús is the promotion of science and its direct and dynamic applicability in the pediatric population. Its Clinical Trials Unit works towards achieving safe, effective and tailored medicines for children to contribute to the improvement of their health; as well as favoring and improving equity in access to new drugs in early phase clinical trial for children and adolescents affected by rare and severe diseases lacking any therapeutic alternative.

The CIEMAT (Centro de Investigaciones Energéticas, Medioambientales y Tecnológicas) is a public research body assigned to the Ministry of Science, Innovation and Universities under the General Secretariat for Scientific Policy Coordination, focusing its activities on energy, environment and different technologies, including biotechnology. Its activity is structured around projects which form a bridge between R&D&I and social interest goals.

In the area of biomedical innovation, CIEMAT is a leading center in the development of innovative therapeutic strategies, especially those based on stem cells, in particular, those related with cell and gene therapies for treatment of hereditary or acquired diseases.