We know that Fanconi anemia (FA) is caused by defects in any one of 23 different genes called “FANC” genes. If we could somehow repair or replace these defective FANC genes, we could treat or prevent FA disease. Gene therapy is an approach to do just this. Gene therapy addresses the root cause of inherited diseases like FA by enabling cells to express a copy of a normal FA gene, thus allowing them to produce proteins necessary for health.

The cells we want to fix are unique types of cells in the bone marrow called stem cells. Stem cells have the ability to generate all other types of blood cells in the body, like white cells, red cells, and platelets. If we can fix the defect in stem cells, then all blood cells that are derived from a stem cell are also fixed. This should restore normal function to diseased stem cells and prevent bone marrow failure (BMF). FA commonly presents first with BMF, so fixing bone marrow cells to prevent this failure is crucial.

The current standard of care for BMF for people with FA is bone marrow transplant using hematopoietic stem cells from healthy donors. Thanks to advancements in transplant protocols, there is now a 90% chance of survival. Despite this relative success, however, transplants require the use of highly toxic chemotherapy regimens and in some instances total body irradiation to deplete failing FA stem cells before patients can receive healthy donor stem cells. These toxic regimens lead to whole-body DNA damage and increase the risk for development of graft-versus-host disease (GvHD) and squamous cell cancers in an already at-risk population. That’s where gene therapy comes in. 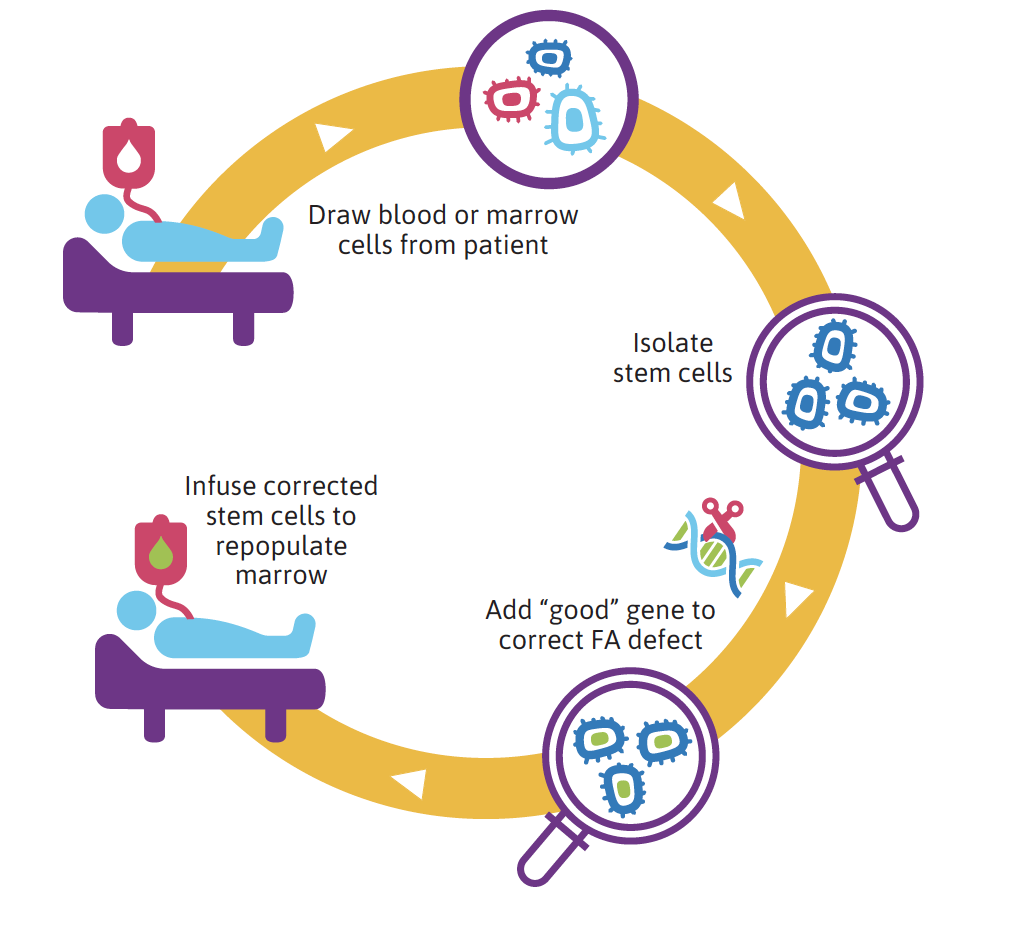 Gene therapy in FA: how it works

How does it work?

Where are we now?

Efforts to use genetically modified cells in clinical trials as a way to bypass the need for bone marrow transplants for people with FA have been unsuccessful in the past. This recently changed with the first-ever published report demonstrating the possibility of engrafting corrected stem cells in FA patients who did not receive any previous conditioning chemotherapy (in contrast to bone marrow transplants). The first results of this gene therapy trial were published by Drs. Paula Río, Susana Navarro and co-workers in September of 2019. Dr. Juan Bueren, the coordinator for the study, and his team recently reported in the journal, Nature Medicine, on the success of a gene therapy trial for people with complementation group FA-A. The phase I/II clinical trial was conducted at Foundation of the Hospital del Niño Jesús in Madrid, under the direction of Dr Julián Sevilla, in close collaboration with the Center for Energy Environment and Technology (CIEMAT), the Center for Biomedical Network Research on Rare Diseases (CIBERER), and the Institute of Health Research of the Jiménez Díaz Foundation (IIS-FJD), among many other partners .

The clinical trial was initiated in 2016 for FA patients with FANCA mutations who had bone marrow failure at the start of the study. The goal of the trial was to use autologous (from the patient) stem cells that were mobilized from bone marrow and extracted from peripheral blood (apheresis). The extracted stem cells were then purified, transduced with a lentiviral vector carrying the wild type (normal) FANCA gene. Patients were then infused with the gene-corrected cells. Nine patients between the ages of 2-6 years were infused with either frozen or fresh FANCA gene-corrected stem cells without the use of harmful conditioning agents. This clinical study varied from past gene therapy trials for FA patients both with respect to the agents used to extract cells from the bone marrow, the therapeutic vector and the conditions used to transduce the stem cells, including a short transduction period (time used to add the correct gene to stem cells while they were outside of the patient).

These results indicate that the corrected stem cells engrafted patient bone marrow and that blood cells derived from the stem cells are thriving and maintaining expression of the normal FANCA gene. Functional laboratory studies also demonstrated that the normal cells were expressing a functional FANCA protein, as the cells were resistant to DNA damaging agents, such as mitomycin-C, and had decreased chromosomal breaks after exposure to diepoxybutane (DEB). After almost three years of treatment, the clinical investigators report that more than half of the blood cells from one of the treated patients are “healthy” cells that express the corrected FANCA gene. Importantly, no adverse events have been reported in any of the patients.

Rocket Pharmaceuticals, Inc., has now expanded and sponsored the clinical trial to a new phase I trial that was initiated at Stanford University under the direction of principal investigator Dr. Sandeep Soni. This trial enrolled two patients aged five and six years who are in complementation group FA-A, and is no longer recruiting patients. The goal of the study is to determine safety and preliminary efficacy of autologous gene correction for the FANCA gene in hematopoietic stem cells without the use of harmful conditioning agents.

Similar to the gene therapy trial in Spain, these patients underwent stem cell mobilization, apheresis, transduction with lentiviral vectors to correct the stem cells, and transfusion of the stem cells back into each patient. The differences between the new phase I study at Stanford and the study in Spain include the use of commercial manufacturing processes to optimize the lentiviral transduction procedure and no freezing of stem cells prior to transfusion back into the patient. Both patients will be followed for three years post-infusion of the corrected cells to monitor for safety and early evidence of efficacy. Initial results from these two patients may be available by late 2019.

The investigative team at Stanford is also currently developing a phase II study for gene therapy in FA-A patients with enrollment expected to open in the coming months. In addition, a highly similar phase II study, also sponsored by Rocket Pharmaceuticals, is also underway at Hospital Niño Jesús in Madrid with initial enrollment planned for the autumn of 2019.